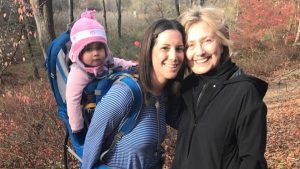 Hillary walking in Woods after election met by supporter

Letter to Hillary Supporters by my Son Jesse Thomas, Attorney in Boise. As a older person who has been in many struggles from?civil rights?to?organizing unions, fighting for health care for all and against needless wars, it is very satisfying to see the younger generation standing up with such wisdom. I know he is my son but I think he nails it on the head. THE STRUGGLE CONTINUES. DON’T DESPAIR, ORGANIZE.

A Letter to Hillary Supporters

(1) Grief: You have Experienced a Loss. It is okay to cry and to feel angry. It is a normal part of grief to feel like you don’t belong, like nobody cares about you, like you?re living in an alternate reality or you feel helpless. These feelings are a part of grief and they will subside. One of the best things you can do is show support to those who are grieving and let them know they are not alone. And you are not alone. If your grief continues for an extended period of time or causes problems in your daily tasks, please see a grief counselor because you may be experiencing complicated grief.

(2) Take Care of Your Mental Health because we need you. You need to learn how to do some self-care and make sure now and in the future, that your mental health does not consume you in this hard fight. The next four years will be a marathon not a sprint. We need good people like you who care. But you must help yourself first foremost.

(3) Don’t Loose that Chip on your Shoulder. Move past the grief, but don’t forget it. For things to change in our country you have to be motivated and you have to work hard. After working forty hours at your job, going food shopping, doing laundry, running your kids to the soccer game, you?re not going to want to pull yourself off the couch on a Sunday morning to stand in the rain in front of the state Capital for another rally that seems to go unnoticed. This does not make you a bad person, this just makes you human. You need to remember this loss and you need to use it to motivate yourself. The best advocates I have had the pleasure to meet understand the hard work it takes to fight for equality and justice. Those advocates also seem to have a chip on their shoulder, and just won’t stop no matter how bad they lose, or how many people they piss off. This is not a time to ?heal? or to ?come together.? This is a time to get motivated and fight.

(4) This is not About the ?Country,? or About Being a ?Patriot,? or about Trump versus Hillary it?s about Equality and Justice. The next four years is about seeking equality and justice for all humanity here and abroad. Take solace in the fact that there are more people who voted for Hillary, for inclusion, for hope; then did not. Take solace in the fact that the poor, the disadvantaged and minority communities voted for Hillary, not for Trump. Don’t move, don’t give up, they need you now more than ever. This fight is not about the essence of America, whatever that means, this fight is about humanity. You may not like what this country ?stands for?, you may not like this country at all. But, that does not matter at all. The United States is the most influential country in the world, and you, as a citizen, have a say in what the United States as a country does. Don’t turn your back on that right. No matter how little you may actually change U.S. policies here and abroad, it simply does not matter. Because, it will always be ethical to use that power to seek equality and justice for everyone.

(5) Don’t Do Anything Rash While You?re Grieving. Don’t make major life decisions right now. Don’t decide to move or put in for that job in New Zealand. We will have plenty of time in the future to act; to figure out what is right for us. It will take some time to organize, to figure out how to move forward politically. Don’t worry; there are some really amazing smart people in this country who know what to do. You may feel helpless, like you don’t know how to move forward. Don’t worry about this now, be patient. It will become clear in the coming weeks on how to move forward. For now, concentrate on your mental health and be patient as our progressive leaders figure out how to fight for equality and justice. If you want to march, if you want to organize right now, do it! But, if you don’t see a way forward and don’t know what to do with these feelings don’t worry it will become clear very soon. You may decide to make some major life changes, that is OK, but don’t do that right now.

(6) Progressives Should Not be Blaming Each Other or Themselves. We did not vote for Trump, and we did not support him. We did not give him money or time. Do not blame yourself that you did not do enough. You cannot control how other people vote, you can only control your own actions, and it is not your fault.

(7) You Don’t Have to do a lot in the Next Four Years, But You Have to do Something. Everybody has a role to play. Some people will make great organizers, or great candidates; and others will be good foot soldiers. It may feel like a daunting task. However, know that the work will be hard, but that you should not ask yourself to do something that you cannot do. The single mother with two kids will not be expected to show up at every rally. The older activists who are burnt out don’t have to lead the charge. All you will have to do is just show up when you are needed; contribute as much as you can. If everyone does just a little bit, it will be plenty, because we have the numbers on our side.

Amy Rush has let me know that people are gathering at Art Roberts Park in Mccall (Three Bears Statue at 5 pm Friday, Nov. 11 to say?we do not stand with Trump’s Agenda for America.

Purchase menu items and drinks from the menu.

REMEMBER TO VOTE. YOU CAN SAME DAY REGISTER