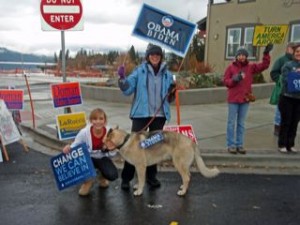 Caucus voters must complete a pledge form that declares the following: you are a Democrat; you are or will be a registered voter in Valley County on November 8, 2016; and you have not participated in another presidential selection process (i.e., the Republican primary). Voter registration forms will be available on site to complete for party declaration, change of address, etc.

To streamline the signing-in process, we strongly encourage you to go to idahodems.org and pre-register for the caucus by completing the registration form. You are now preregistered for the Caucus. Print your ticket. Those of you who have smart phones can speed up the process even more by first downloading Eventbright and then your ticket. Of course you can register the night of the caucus.

The caucus is also where delegates to the Idaho Democratic presidential convention, in Boise in June, are selected. If you are interested please feel free to put your name forward to be a delegate at the caucus. You can pre-register to become either a delegate or an alternate to the State Convention at Idahodems.org.

The caucus affords a fun and very basic way of participating in a national political process. The caucus simulates somewhat the national presidential nominating convention where supporters cheer their candidates and give speeches to persuade other voters to their camp. The public is also invited. Special areas will be set-aside for observers and the media.

After you register and complete your pledge form you will go to designated subcaucus areas for Clinton, Sander’s or undeclared. Once the Caucus Chair explains the plan for the evening, speeches will begin with the purpose of swaying the opponents? supporters and the undeclared. Folks thus persuaded can move to a different subcaucus area.

When the sorting is done, candidate preference ballots will be collected and counted to determine the percentage of voters in each subcaucus, relative to the total participants. That percentage determines how many delegates from Valley County each candidate will get. Because of our population, Valley County is allocated 4 delegates to the state convention.

That brings us to the second part: electing delegates. In order to have at least one delegate, a subcaucus must have at least 15 percent of the total number of participants. If the undeclared subcaucus, for example, fails to reach the 15 percent threshold, those folks must go to one of the other subcaucuses. The sorting and voting process continues at least one more time. A 3rd go around maybe necessary to determine the distribution of delegates between the 2 presidential candidates and the undeclared group has been determined.

Thirdly, the caucus will determine who the delegates to the Idaho State Democratic Convention will be. If you want to be a state convention delegate to support your favorite candidate, this is the time to put your name forward. Please note that neither the Valley County Democrats nor the Idaho State Democratic Party provide financial support to attend the convention. You will have the opportunity to speak on your own behalf. Members of your subcaucus will vote to elect the requisite number of delegates and alternates. You may declare your candidacy prior to the caucus by going to idahodems.org

Delegates to the State Convention (Saturday, June 18, 2016- Boise Idaho)?have two main responsibilities: to support their candidate as pledged and to participate in the writing and adoption of a new Idaho Democratic platform. If you have time, interest, and resources, you may also choose to run for delegate to the national Democratic nominating convention in Philadelphia this summer.